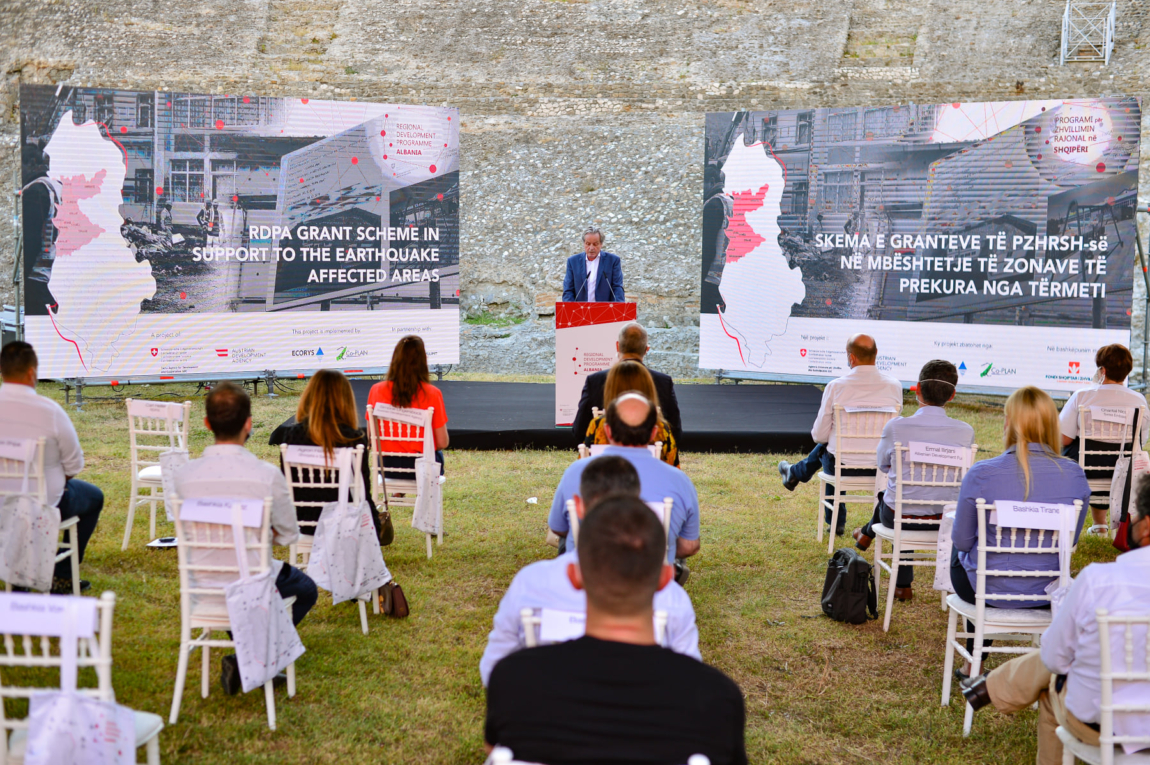 Launching of the RDPA Grant Scheme in support of the earthquake affected areas, in the premises of Amphitheatre of Durres

Through the joint Swiss-Austrian Regional Development Programme a new grant scheme became operational today in support of efforts dealing with the aftermath of the November earthquake. The grant will be implemented in close coordination with the Albanian Development Fund and local government associations.

“The Grant we launch today is a contribution of the Swiss and Austrian Governments to support the recovery of urgent needs caused by the earthquake as well as a materialization of the Regional Development reform of Albania. It is also part of Switzerland’s and Austria’s broader support of Albania’s earthquake recovery, part of the so called pledge at the Brussels conference in February this year”, said Swiss Ambassador Adrian Maître.

“With the Grant scheme the Swiss and Austrian Governments intend to support particularly vulnerable people as they are the most affected ones by the earthquake and the Covid19 pandemic. It is key that project ideas for the municipalities are based on the real needs and requests of affected citizens and to also closely involve local community actors such as businesses and NGOs in the process”, said the Head of Office of the Austrian Development Agency in Albania Simone Ungersböck.

Through the grant scheme municipalities will access funds for recovering and improving services to citizens. The application process will stay open until September 21st and will be administered by representatives from the Regional Development Programme, Albanian Development Fund and municipal associations. It aims to restore and recover all aspects of public services, rebuild infrastructure and facilities, and revitalize the economy, tourism, social and cultural lives of the affected communities.

“This grant scheme – although a modest amount in proportion to the needs for reconstruction – is a necessary and proper support to complete certain elements in the reconstruction plan and to have a fuller recovery process”, said the Director of the Albanian Development Fund, Dritan Agolli.

Affected municipalities that can benefit from the grant include: Shijak, Durrës, Krujë, Tirana, Kamëz, Vora, Kavajë, Rrogozhina, Kurbin, Mirdita and Lezhë. Regional Development Programme Albania IV (RDPA), 2019 – 2023, is a project of the Swiss

Agency for Development and Cooperation (SDC) and the Austrian Development Agency (ADA), implemented in partnership with the Government of Albania.

To know more about the Grant Scheme click HERE